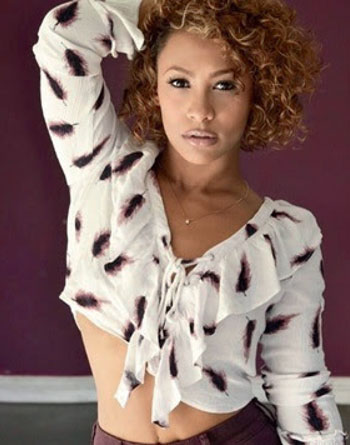 The Oprah Winfrey executive produced/co-starring series Greenleaf follows the unscrupulous world of the Greenleaf family and their sprawling Memphis megachurch, filled with scandalous secrets and lies. The show was the #1 series debut in OWN history. Asia’h plays ‘Tasha Skanks,’ the wife of ‘Basie Skanks’ (Jason Dirden), a pastor of Greenleaf ’s rival church Triumph. ‘Tasha’ is a thorn in the side of rival ‘Kerissa Greenleaf ’ (Kim Hawthorne) and Greenleaf family matriarch ‘Lady Mae’ (Lynn Whitfield). The new season shows ‘Tasha Skanks’ in a perilous position, forced between both families. THE NEW EDITION STORY broke BET ratings records when it aired in January 2017, and THE BOBBY BROWN STORY picks up where that pic left off, following R&B musician Bobby Brown’s (Woody McCain is reprising his role as Brown) successful solo run. In the series, Asia’h plays Bobby’s high school sweetheart and on-and-off love interest for 14 years, Kim Ward. Their roller coaster relationship ended in 1992 when Kim (pregnant with their second child) found out that he was engaged to Whitney Houston (played by Gabrielle Dennis). The show is executive produced by Jesse Collins (THE NEW EDITION STORY) for JCE Films and directed by Spike Lee protégé Kiel Adrian Scott. Growing up in small town Missouri, Asia’h started writing music at the age of 6. Singing became a source of great happiness for her and she did it wherever she could – in school, home, and church. While in high school, she won a regional talent competition, and subsequently moved to Atlanta. While in Atlanta she auditioned for American Idol and was selected to compete (after at first being denied). She went on to become a Season 7 finalist of the hit show. Her musical career began to skyrocket from there – she got signed with DefJam and began working with iconic producers Kenneth ‘Babyface’ Edmunds and L.A. Reid.

She became a part of the original cast of the musical Hair Show alongside music legend Chaka Khan. Then, three weeks before her first musical showcase and release, she was in a devastating car accident – breaking her jaw, pelvis, nine ribs, and multiple vertebrae. Her mouth was wired shut. Her music career would be placed on the back burner. But when she feels weak, she pushes herself more. It was during this time of reflection and healing that another opportunity arose. She met a manager and began going to auditions, securing her first guest star role on TNT’s Murder in the First. Before long she began booking more and more roles before landing her role on Greenleaf. Music is still very much apart of her life – she loves all kinds, R&B, Soul, even Country (her Missouri roots shine through).

Asia’h’s father was a professional body builder and he instilled in her a love of health and fitness. She is also adventurous and enjoys being outdoors – whether it is hiking, jet skiing, climbing or even bungee jumping. She loves to travel – and recently spent an entire month in Bali. A firm believer in taking care of ones’ body and health, she is also a licensed massage therapist.

With a Tiffany Haddish-like magnetism and personality, Asia’h Epperson is a resilient and fierce actress and musician and is ready to take over the entertainment industry.