Writer, director and producer Greg Berlanti will receive a Patron of the Artists Award for creating significant professional opportunities for performing artists to work and thrive. Berlanti and fellow industry leader, director, producer and writer Ava DuVernay, will receive the Foundation’s two Patron of the Artists Awards of the night. Actor, director and producer Jennifer Aniston will receive an Artists Inspiration Award for using her creative and professional success as a performing artist to advance philanthropic and humanitarian causes. She, along with actor and philanthropist Mark Ruffalo, will be honored with the two Artists Inspiration Awards of the evening. The annual awards show benefits the nonprofit SAG- AFTRA Foundation and is not televised.

Previous SAG-AFTRA Foundation Patron of the Artists Award honorees include Ted Sarandos, Spike Lee, Jeffrey Katzenberg, Lee Daniels, Kathryn Bigelow, Judd Apatow, Megan Ellison and Rob Marshall. Previous SAG- AFTRA Foundation Artists Inspiration Award honorees include Lady Gaga, Harrison Ford, Kate Winslet, Lionel Richie and Leonardo DiCaprio. “We are honored to present Jennifer Aniston with one of our Artists Inspiration Awards at this year’s Patron of the Artists Awards. Her celebrated iconic roles in television and film are beloved by audiences all over the world, but it is her philanthropy and genuine empathy for people in need that we will honor on November 7. From her tireless work as a spokesperson for St. Jude Children’s Research Hospital to her advocacy work for cancer research, Jennifer sets a sterling example for all artists to use their influence to give back to others,” said JoBeth Williams, SAG-AFTRA Foundation Board Pre- sident.“We are also thrilled to be honoring Greg Berlanti, one of the most prolific writers, directors and producers working in Hollywood today, with one of our Patron of the Artists Awards. Greg has discovered, nurtured and propelled creative talent in front of the camera and below the line. With an astounding 18 scripted series to his credit, Greg’s ensemble-based shows have launched the careers of countless actors. His creative contributions to the industry not only create new narrative universes, but they are responsible for generating hundreds, if not thousands, of jobs in Hollywood. We look forward to honoring both of these dedicated artists and leaders.” 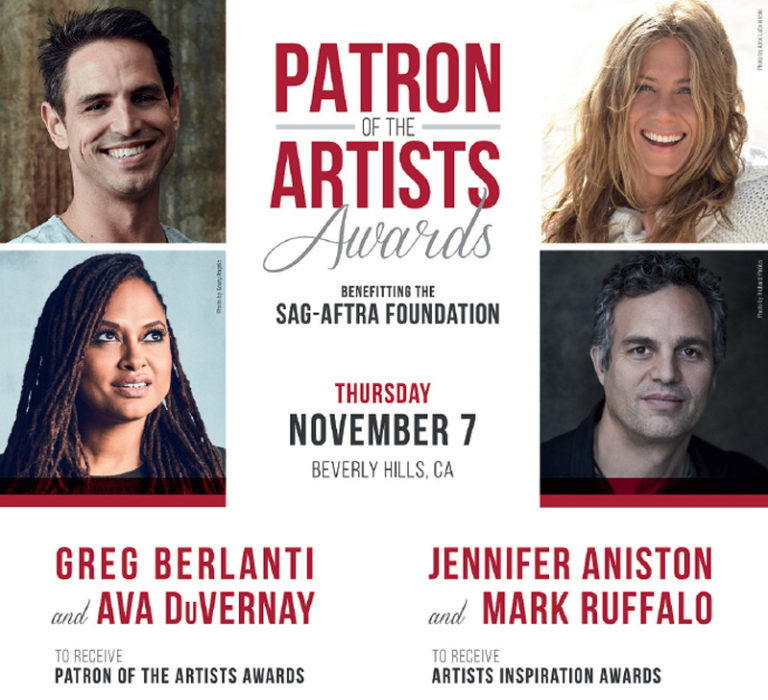 Golden Globe and Emmy winner actress Jennifer Aniston will next be seen in the highly anticipated APPLE TV + series The Morning Show opposite Reese Witherspoon and Steve Carrell. She also ser- ves as Executive Producer on the series. Most well- known for her role as “Rachel Green” in the classic television comedy FRIENDS, Aniston’s television and film career spans two decades, starring in criti- cally acclaimed films including THE GOOD GIRL, FRIENDS WITH MONEY and CAKE as well as blockbuster comedies including THE BREAKUP, HORRIBLE BOSSES and WE’RE THE MILLERS. In 2018, Jennifer appeared in Netflix’s DUMPLIN’ and recently in the Netflix comedy MURDER MY- STERY opposite Adam Sandler.
A passionate humanitarian, Aniston has donated millions of dollars for natural disaster relief to organizations such as The Ricky Martin Founda- tion and the American Red Cross. She also has been an avid supporter and advocate of St. Jude Children’s Research Hospital. Aniston was a reci- pient of The GLAAD Vanguard Award in 2007 for her outstanding contributions to increase under- standing and awareness of the lesbian, gay, bisexual, and transgender community. Additionally, Aniston has supported many non-profit organizations that advocate for education, animal protection, and cancer research—even directing one of an anthology of five short films “Project Five” exploring the impact of breast cancer on people’s lives.

WGA, DGA and Golden Globe nominated writer, director, and producer, Greg Berlanti, is the force behind some of the most inventive and acclaimed works in film and television. Currently, Berlanti’s company has a record-breaking 18 scripted series across six different networks, the highest number of shows to air at one time for a tv producer and creator. He began in television on the hit show DAWSON’S CREEK and became an executive pro- ducer and showrunner of the series after one year on staff. Since then, Berlanti has served as creator, writer or executive producer behind shows such as EVERWOOD, BROTHERS & SISTERS, ARROW, THE FLASH, SUPERGIRL, BLINDSPOT, RIVER- DALE and YOU.
Berlanti made his film directorial debut in 2000 with THE BROKEN HEARTS CLUB. His most recent feature was the 2018 critically acclaimed LOVE, SIMON. He currently resides in Los Angeles with his husband and two children.

The SAG-AFTRA Foundation’s Patron of the Ar- tists Awards is an annual fundraiser that benefits its vital emergency assistance and free educatio- nal programs for SAG-AFTRA artists, as well as its Emmy® nominated children’s literacy program Storyline Online® that features actors who read to over 10 million children worldwide every month. The Patron of the Artists Awards event includes musical performances with ticket sales benefitting the SAG-AFTRA Foundation. Sponsors include Focus Features, Amazon Studios, United Airlines, SAG-AFTRA, Variety and Los Angeles magazine. For more information about sponsorships and tickets, visit patronawards.com.

About the SAG-AFTRA Foundation The SAG-AFTRA Foundation is a 501(c)(3) non- profit organization that provides vital assistance and free educational programming to SAG-AFTRA artists and families while serving the public at large through its Emmy® nominated children’s literacy program Storyline Online®. The Foundation relies solely on support from gifts, grants and spon- sorships to maintain its free programs. For more information, visit sagaftra.foundation.