MONTE CARLO, 27 SEPTEMBER 2018… PHILANTHROPISTS, CONSERVATIONISTS AND ENVIRONMENTALISTS WERE JOINED BY STARS FROM THE WORLDS OF SCRE- EN, FASHION, ART AND MUSIC IN MONA- CO LAST NIGHT. GATHERING TOGETHER ON THE STUNNING TERRACES OF THE MONTE-CARLO OPERA, TO RAISE FUNDS AND AWARENESS FOR THE FUTURE OF A SUSTAINABLE OCEAN, OVERSEEN BY THE PRINCE ALBERT II OF MONACO FOUNDA- TION. THE LIVE AUCTION SAW A STAG- GERING 21 MILLION EUROS RAISED ON THE EVENING, WHILE FUNDS CONTINUE

TO RISE AS THE ONLINE AUCTION IS ON- GOING UNTIL 4PM CET ON THURSDAY 11 OCTOBER.

HSH Prince Albert II commented at the Gala, “Today the oceans, which represent over one billion cubic kilometres, are vulnerable. Today, these expanses which cover over two-thirds of the planet are threatened more than they have ever been befo- re in the history of Humankind. Today, the oceans need us… They need us to protect them. They need us to establish a new relationship with them: more attentive, more responsible, more sustainable.”

Accepting the award from the Sovereign, Orlando Bloom said: “The urgency of climate change has never rung louder than it is now. The science is clear. And what will they say of us, a hundred years from now, since we knew but sat and did nothing? The world is changing, and we need to change our habits along with it. 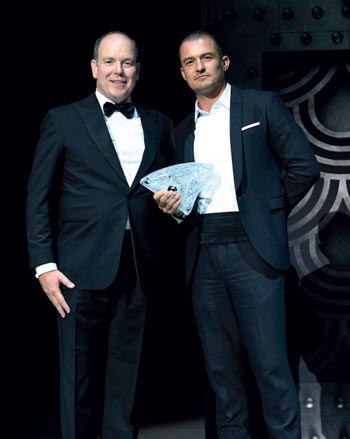 So I would challenge you to think what impact you can make and what legacy you will leave for your children and grandchildren because I truly believe that each and every individual is capable of creating real and monumental change.”

Thanks to the extraordinary generosity of the Gala’s 720 guests and bidders from around the globe, the 21 million euros raised over the evening, combined with the additional funds from the ongoing online auction, enables the Foundation to continue sup- porting vital research, education and conservation initiatives worldwide which are essential for the future of the global ocean.

Commencing the evening, guests enjoyed cocktails whilst viewing the collection of 47 live-auction lots on display, reflected by the grandeur of the Opéra de Monte-Carlo backdrop. Lots included the world’s first luxury electric powerboat; the opportunity to go horseback riding with Madonna and surfing with the legendary Kelly Slater at his surf ranch in California. Entering the dinner via a nautical themed portal, based on Captain Nemo’s vessel Nautilus, guests were transported into an un- dersea realm under the stars complete with floating jellyfish chandeliers.

Bio Michelin Star Chef, Paolo Sari, created a ga- stronomic extravaganza reflecting the Gala’s ethos with completely organic and responsibly sustained ingredients from the sea and land, including the wines and water. A Mediterranean fish bouquet followed a mousse of Monaco’s smoked black ruff; with a filet de turbot rissolé aux chanterelles and sturgeon pearls served as the plat principal. Roun- ding off the menu were Côte d’Azur ‘Red berries from a Wednesday at the end of September’.

Celebrations continued into the early hours at the Monte-Carlo Casino, with the Gala after-party hosted by Richie Akiva and 10AK, and famed jazz pianist ELEW giving a high-octane performance for guests dancing the night away.

Further details of the lots available and registration details for the online auction until 4pm CET on Thursday 11 October can be found here: www.montecarlogala2018.com