Mexican-born, actress, singer and activist Maite Perroni killed the red carpet at GQ’s Men of The Year Awards in Mexico. Further enforcing her influence in the fashion world, the Dark Desires” starlet rocked a fierce studded mask and Bulgari accessories as she took home the evenings awards for “Mexican Actress of the Year.” Tommy Hilfiger, Edgar Ramirez, Diego Boneta, Yalitza Aparicio and J Balvin were also among the winners at the star-studded event in Mexico City. 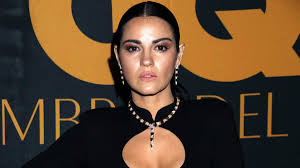 Maite has enticed audiences worldwide as the lead of the acclaimed Netflix original thriller series “DARK DESIRE,” which made its way into the Netflix “TOP 10 LIST” in over 180 countries worldwide since its summer premiere. The stunning was described by Vogue Mexico as “one of the most successful actresses of her generation”, and with over 20 MILLION followers across her social media platforms, Perroni is setting her sights on conquering Hollywood.

Maite portrays ‘Alma Solares’, an attorney and college professor who, feeling betrayed by her husband, ‘Leonardo Solares’ (Jorge Poza) is ill advised by her best friend ‘Brenda’ (María Fernanda Yepes) to have a one night stand with ‘Darío Guerra’ (Alejandro Speitzer), a much younger man. Her temporary lapse of judgement paves the way to a dangerous obsession that turns her life into a living hell that leads to unexpected and tragic consequences.

“Maite Perroni is one of the most recognized faces on Mexican television and has positioned herself as one of the most successful actresses of her generation in Mexico.” VOGUE Latin America

Perroni rose to fame as part of Latin Grammy-nominated Mexican pop group RBD, created in 2004, as part of a storyline within the teen-focused Mexican telenovela “Rebelde.” The group featured Maite as a lead singer and she helped carry the group to worldwide recognition and acclaim; they won several awards, including “Best Group of the Year,” “Best Album of the Year,” “Best Concert,” and “Best Song of the Year.” RBD has sold over 50 million records and performed in sold out venues such as “Estadio Maracaná” in Brazil, Madison Square Garden in New York, The L.A. Coliseum, American Airlines Arena in Miami, Estadio Vicente Calderón in Spain, Auditorio Nacional and Palacio de los Deportes in Mexico City, among others. As an award-winning recording artist, Maite has performed sold-out concerts throughout Brazil, Mexico, Spain, and Ecuador. Her latest album, on the Warner Brothers label, released in September 2013, was an instant success and quickly reached #2 on the Billboard 100 charts.

Maite was ranked among the top ten of the “100 Most Beautiful Faces of 2016” by TC Candler and to date, is the only Mexican woman featured on the list five years in a row. She has also been featured in People en Español’s “50 Most Beautiful People in the World” for the past 12 years. Her popularity was cemented in 2008 when she was selected by Mexico’s youth to become one of the first Latin women to have an iconic Barbie doll fashioned after her. The “Maite Perroni Barbie” was a success in the U.S., Latin America, and Spain. Now, Maite has shifted her focus to pursue more challenging roles and grow as an artist, leaving behind the naïve and romantic characters that have shaped her image, she has opted to work on shorter, edgier original series on streaming platforms. She currently holds a new series in four different streaming platforms – “Dark Desire” on Netflix, “Herederos por Accidente” on Claro Video, “El Juego de las Llaves” on PANTAYA in the U.S. and available through Amazon Prime Video in Latin America. Through it all, she still finds time to keep in close touch with her fans – which include +7.9M followers on Facebook, +4.7M on Twitter, +8M on Instagram and +1M YouTube subscribers. When she’s not busy traveling, filming or speaking on female empowerment and advocating for LGBTQ+ rights, she loves to cook amazing vegetarian dishes and spends her time hiking, cycling or rollerblading with her husband, Chilean singer-songwriter and producer, Koko Stambuk. 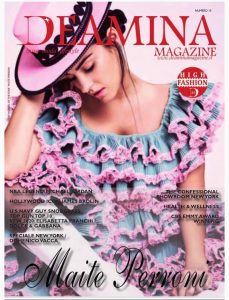