20 year old model Gracie Phillips, who has made an international name for herself as a top model at the powerhouse modeling agency Wilhelmina, and just revealed that her celebrity dad is Golden Globe nominated actor Lou Diamond Phillips, whose breakthrough came when he starred as Ritchie Valens in the biographical drama film LA BAMBA, and for the Academy Award-nominated STAND AND DELIVER. 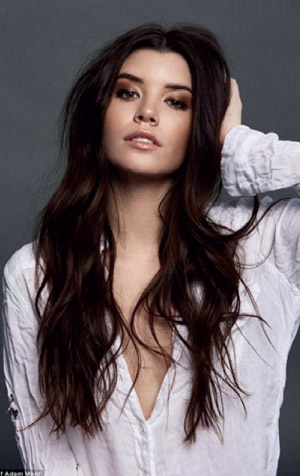 For the past two years and until this week, Gracie kept her celebrity father a secret as she built her modeling career, choosing to instead build a career based on hard work and her own skill set, rather than on the coattails of her famous dad. Now that Gracie has established herself as a thriving model at one of the world’s top modeling agencies, she is now happy to discuss her rise to model stardom and her Hollywood pops.

Like e her rising model contemporaries with famous parents including Brooklyn Beckham, Bella and Gigi Hadid, and Kylie Jenner, Grace’s childhood was one of film sets, travel and paparazzi eager to snatch a photo of her famous parents. She joined her father in front of the camera early on, starring in a Hallmark film. But despite her acting pedigree and desire to try it again one day, modeling is where Gracie expresses herself best – and says hopes to follow in the Hadid sisters’ footsteps and take to the catwalk as a Victoria’s Secret Angel.